A Mk3 hub normally has that groove (arrowed). Also, note the difference in the Mk3 spoke pattern. L.A.B./All - well, I feel like I dodged a bullet somewhere here. Spoke to my wheel man and he will take a look at the front hub and let me know - lockring or not. LOL...maybe xmas at RGM's website I think.

All - looks like xmas via RGM, my wheel fella looked and said it has a lockring. I'll get some of the HD inner tubes locally and take the lot to his shop. Now to touch base with my wheel builder.

The old front hub is probably worth $100 by itself.
Wider rims ? 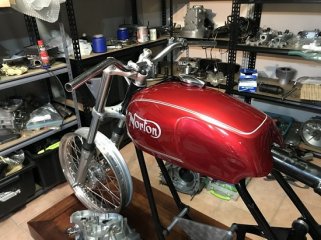 Timewarp,
Sticking with mostly stock front, Natural finish Excel Rim and TT100 tyre whilst the rear I've gone for a slightly wider Excel Rim (natural finish), 18" & a 110/90 tyre IIRC. Bridgestone I think.
My original ideas got scuppered years ago as the black anodising of the alloy rims I had, wound up not so good. The rear rim must have been a runt-of-the-litter. It looked
OK from the outside, but truing it revealed it was a horrible POS and not even even close to concentric - up/down & side to side. Unlike the steel rims I removed.
I'll know the sizes for sure when I get the wheels back.
I'll flog the pre MK111 front hub off once I clean it up.

Ctefeh said:
All,
Lurking for a while here. I have been Commando-less for about 20 yrs but decided to finish off my MK111 that I bought back in the day. I had a MK11A (bought at the same time) for riding around on as I knew the MK111 was going to be a ground up resto-mod job. A pic here of the MK11A, a poor abused child when I originally got it that I slowly fixed up over the course of three 1/2 years.

I wound up flogging this off due to the fact it spent about 2 1/2 years spread over my garage floor and 1 year actually going. Every time I went to do any routine maintenance, things just blew out. Some examples :

Went to check chain tension and noticed rusty blotches around the rim...? Decided to have a look at the Hub and lo and behold - rusty water out of the hub bearing in the sprocket. Bearings & seals all around.

Isolastics - pulled back the rubber boots to discover the PTFE's had crumbled....replace both - epic job seeing as how said rust above had worked it's way into the whole rear isolastic assembly and froze up the through stud.

Lot's of those kinds of episodes.

An interesting side note : the blokes who bought it were my local parts man (ute provider) and his mate - whose name I recognised as a Jag dealer. A couple of years later I offloaded some paddock
stands via FleaPay and same bloke bought them. I only found out when I dropped them at his shop - and in the dim recesses were his Brit Racebike collection that I had seen in action - including a very brutal J.A.P. powered twin I'd
admired at some classic race events. He'd on-sold my Commando to his brother after throwing a few more electrical components (coils etc) at it.
Click to expand...

It's irrelevant to your Mk111 build but I just wonder why you called the blue tanked bike in your very first post a Mk11A.

Looks to have the ham can aircleaner to me and therefore a Mk11.

Am I missing something ?

johnm said:
It's irrelevant to your Mk111 build but I just wonder why you called the blue tanked bike in your very first post a Mk11A.

Looks to have the ham can aircleaner to me and therefore a Mk11.

Johnm,
Hazy memory is telling me it was "sort of" deduced from the Eng/Frame/GB no's. As stated - an abused child when I got it. If the Ham Can is incorrect - yet another P.O. exercise. And mention of that
brought back a flood of unwanted memories of trying to get that off and discovering more wrongs inflicted on it. At the end of that episode - at least I discovered the carb slides had been done and were in good condition. Pipes not correct? I replaced the dunstall styled garbage that was on it with those ones (*sigh* - and a crap exhaust thread repair I found and had fixed properly) .

All,
Why no progress? Slid to a halt at the moment. Have been collecting some parts for some things I discovered were tatty, and I got (eventually) an AGM battery too. Still lurking and verifying that I am not going to suffer (reading up on that starter sprag post) etc.

Ctefeh said:
Hazy memory is telling me it was "sort of" deduced from the Eng/Frame/GB no's. As stated - an abused child when I got it. If the Ham Can is incorrect - yet another P.O. exercise.
Click to expand...

I also noticed it seemed to be a Mk2 and not a Mk2A as there are other distinguishing features of a Mk2A such as the 'A' Dzus side panel fastener which it doesn't have. The Mk2A battery also fitted across the frame due to the additional space taken up by the 'A' plastic airbox.

It isn't really possible to tell a Mk2 from a Mk2A by engine/frame/gearbox number as both Mk2 and Mk2A were produced concurrently from serial 307311 and the majority of the factory records for the Mk2/2A models no longer exist (unless 317848 or later).
The Mk2A was the low noise emission model for the European market and the Mk2 was the US market model although some Mk2As were eventually sold in the USA later in '74 the majority of US models were Mk2s.
Edit:
A few 'A' models also appear to have got to the US probably through the personal export scheme which was popular with US service personnel etc. at the time where a bike could be bought in the UK 'tax-free' as long as it was exported within a certain length of time.
Last edited: Mar 7, 2021

All,
So be it - rather than trust my foggy 'n' defective memory banks, let's go with sharp detailed knowledge. MK 11 it will be. I do remember it had it had the steel dzus fastener for the sidecover, but little else - can't even find paperwork I used to have for rego (serial numbers etc).

Ctefeh said:
I do remember it had it had the steel dzus fastener for the sidecover,
Click to expand...

A "steel" Dzus would be Mk2 and attaches a bracket at the front of the panel to the frame.
The Mk2A had a black plastic Dzus that would be visible in the photo. 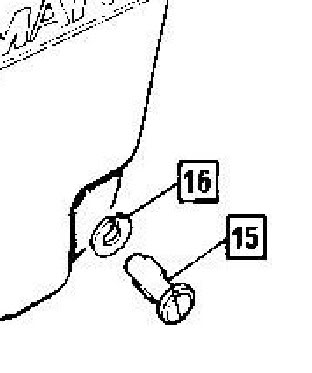 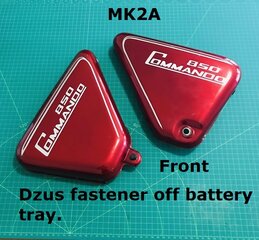 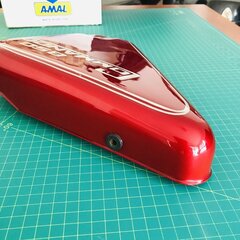 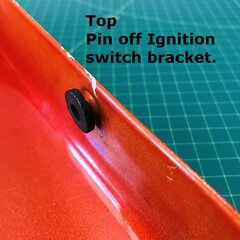 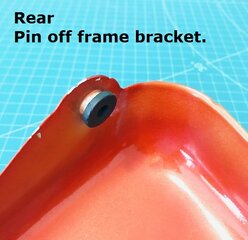