Jerry Doe said:
That GP looks like its what I need on the rear. Do you have the same SM on the front like I do? (see rear tire in pic)
Click to expand...

Not terribly clear but gives some idea... Jerry Doe said:
Thanks mate. I want to see some pics of your bike in general as well as the tyres, cheers
So I have been in the US for too long, I forgot how to spell tyre lol. My spell checker says tyre is wrong Tire is right.
Click to expand...

That's the tire I am going to get. Your bike is beautiful, well done

Jerry Doe said:
Yes, an SM is what I thought was in the box. I have a spare front tyre now. Its good for now so I can move it around in the garage. I need to get the 750 up on the list for routine work...
Click to expand...

Yep it's definitely a front tyre spelt "tyre" you have there
The famous Avon "death master" as they are affectionately known
I believe they are made in a better compound these days but why do you want them?
Is the bike going to be 100% original?
It's looking great btw

baz said:
Yep it's definitely a front tyre spelt "tyre" you have there
The famous Avon "death master" as they are affectionately known
I believe they are made in a better compound these days but why do you want them?
Is the bike going to be 100% original?
It's looking great btw
Click to expand...

Hi Baz, yes I would like it to look as original as possible, however paint is not going to be China Red as its too red for me. I am going with Candy Apple Red. I am probably going to get an Avon GP for the rear, like Rob has. At least I can move it around now. Wish I was sent the right tyres/ tires in the first place
I am excited about this bike. I cant wait to get the gearbox done...

Tire update.
I have been thinking about this. I have a spare modern Avon Road Rider the right size, so I am going to put that on the back. I will have to change away from the SM on the front later too, but need another tire on the front as I am sure that the old SM pattern will not work well with a modern tyre on the back- thoughts? The more I think about this, the way I ride, I do need modern tires.

I wouldn't bother with an Avon GP. They are twice the price of the other options, & the one I fitted to my 650ss was illegal in just 1000 miles. I've since fitted a 4.10 x19 road runner which looks good & handles well. I certainly didn't fancy an Avon square death!

That’s why I mentioned the fact the GP is a race tyre... it won’t last long at all on the road.

I’d also be concerned about a race tyre on the rear with a road tyre on the front. Seems to me you could over cook the front end that way around.

Personally Jerry I would not mix a Roadrider with a Speedmaster. I‘d either go for a suitable Safety Mileage on the rear, or a pair of Roadriders. Or, as has been mentioned in another thread, a pair of Road Runners as they’re not quite as modern looking as the Roadrunners and are happy on WM2 rims.

SM’s: you might be surprised with the modern SM‘s Jerry as they’re in modern compound etc so might be worth a try, especially as you already have two fronts !

Roadriders: do handle fabulously, they‘re definitely my favourite (I have them on 3 bikes) but Avon recommend a min rim width of 2.15” for the 19”s.

Roadrunners: might be a good compromise of classic appearance and modern performance, they’re modern compound and construction, and will fit WM2 rims (ie 1.85”).

BTW, I’ve just fitted Avon’s to my Harley, what a difference! And I just realised that now means ALL my bikes are on Avon’s! So I’m possibly not very neutral on this topic...

Avon works hard at confusing you! The tyre names are often close to each other: SM = Speed Master or Safety Mileage?
I have the 400-18 Safety Mileage on the back of the 69 Interceptor. If you look at the profile it is rather square and although I no longer am
a foot rest dragger it does make you wonder about laying WAY over at the roundabouts. It also has the most rigid sidewalls on
any tyre I've ever used.

Onder that tyre looks horrid! That’s what Avon seem to call the SM ‘A’. 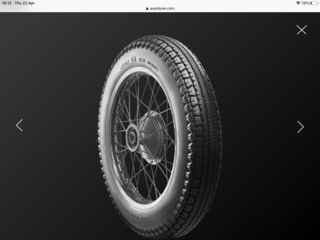 Having thought about this more seriously:

I checked and those SMs I was sent are over 10 years old. Definitely not using them. I have to put safety first. I ride pretty quickly. I know I am going to have to adjust my habits on this bike due to the crap brakes (we will see). I love the Avon Roadriders on my 750 and have decided to go with them. I feel safer already: I think I was sold old ones. They were not what I expected.

Looking good Jerry, although that rear tire might be on backwards?
I tried to ride my Super Rocket as it came, that was with a new Dunlop K81 4.10x19 on the rear and an ancient Avon SpeedMaster at front. It also had the original Cowhorn Western bars. I wanted to ride it like that and enjoy it, but it was no fun on corners.
I ditched the high Cowhorn bars for some UK style low bars and put an Avon Roadrider 90/90/19 on the front.
Handling is decent now, but it's no 650ss for power or handling. As such I tend to ride it a bit more sedately than the other bikes. It has quite a nice little torque band for exiting corners, not at all fast but just a real good pull from down quite low in the rev band. It does have a bit of a second power band above 5000, but it's not huge and it feels like I'm beating hard on it at higher RPM.
So it low rpm and slower riding just listen to the great BSA twin sound ( a bit different from Norton)

The stock front brake was worn out and barely working. I'm sure it would have been reasonable with new linings, but I didn't bother trying.
A friend sold me a complete A65 Lightning wheel with 2 LS brake. I had to fettle it a bit, but it is a fantastic brake now.

Jerry, universal tyres should have two directional fitment arrows on them, one for front fitment and one for rear fitment (at least they always did, I assume it’s the same for the newer MK2’s ?)

Onder said:
I have the 400-18 Safety Mileage on the back of the 69 Interceptor. If you look at the profile it is rather square and although I no longer am
a foot rest dragger it does make you wonder about laying WAY over at the roundabouts. It also has the most rigid sidewalls on
any tyre I've ever used.
Click to expand...

I had one on my ES2 for a while. They do surprisingly well in the corners BUT i had a blow out and the tyre, for me at least, is dangerously un-rideable when flat. Those rigid sidewalls randomly wander all over the place. I have one going spare if anyone wants it

<I have one going spare if anyone wants it>

I run a pair of these tires on my 48 Harley. Work great and handle fine for that bike.

Jerry, universal tyres should have two directional fitment arrows on them, one for front fitment and one for rear fitment (at least they always did, I assume it’s the same for the newer MK2’s ?)
Click to expand...

Yep its on the wrong way around