If I were to consider honing these carbs, what would the correct tool for that be?

I would say a mill and boring bar, but I don't have one; so, after trying to squeeze it back to round, I would use 600 grit sandpaper and a finger. I would measure in many spots and lightly rub the "high" spots until I had it round enough that the slides moved smoothly. This has worked for me when the top was over tightened - haven't tried it when the whole carb was distorted by the flange being over tightened.

An alternative would be a brake hone, but although it would enlarge it enough to get the slides to work, the oval shape would likely remain.

In any case, if they are tight at the bottom it will be very hard to correct.

I think I'm just gonna call it a $120 mistake and keep using the carbs that are on the bike now. They work fine. These will go back into their boxes and sit on the shelf another 10 years.

Edit: Presumably, your 'Fastback' is an 850 with Fastback parts?
Click to expand...

I bought the bike in 1997 as a early 1969 Fastback. But its 750 engine was really worn out to the limit.
And after my accident last year it has turned even more "special"

Anyway, the carbs have stay up floats, hard anodized slides (Amal stamp) and the pilot jet modification.
Needle jet is the correct 106 size.
They came with flat top spray tubes and short needles.
I changed that to sectioned spray tubes and long needles.

The engine accellerates nicely without any hickups.

But the spark plugs get sooty when the bike is idling for a while and then it starts to misfire on both cylinders.
When i thrash the bike a little bit, the problem disappears.
Next traffic light: same problem.

Its also suspicious that i can start the engine from cold without using the air slides.
Obviously too rich.

I didnt check the pilot jets before mounting the carbs.

So i will take those mongrels apart agin.

maylar said:
I think I'm just gonna call it a $120 mistake and keep using the carbs that are on the bike now. They work fine. These will go back into their boxes and sit on the shelf another 10 years.
Click to expand...

I just made the jig shown here https://www.accessnorton.com/NortonCommando/amal-de-warping-jig.30033/
and used it on 4 different 932 carbs that would not accept new Amal anodized slides. Fixed all 4 of them. 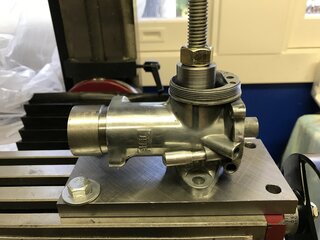 Maylar, you can easily tell if your carbs are warped by putting the flange on a flat surface and see if it rocks. All 4 I had rocked, some up to 0.007". The flange warp goes hand in hand with the bore warp which the new slides don't like. If yours are warped, maybe we can work out a way to fix them rather than having them sit on the shelf for another 10 years.

Thanks Nick. I'll put them on a flat plate and check the flanges.

maylar said:
The boxes say Amal. I bought them from Classic British Spares and their web site says genuine Amal imported from England. I will contact them for feedback/advice.