Hi All, I'm thinking of fitting an electronic gearchange system as I've got restricted movement in my right ankle (Mk2A).
Anyone done this mod, not sure if it will work ok with carbs & not fuel inj.
Cheers
Paul

hayabusaman0 said:
Hi All, I'm thinking of fitting an electronic gearchange system as I've got restricted movement in my right ankle (Mk2A).
Anyone done this mod, not sure if it will work ok with carbs & not fuel inj.
Cheers
Paul
Click to expand...

Have you considered the alternative of a left foot gearchange? Or is the ankle issue also likely to inhibit braking?

To implement a completely electric solenoid based system would require some precise engineering. Probably more precise than the AMC gearbox itself!!

As far as making changes under power, an ignition cut out operated by the solenoid might be effective enough, compared to complete control over fuelling and mapping!

But I foresee some extensive development here, dependent on what you can accept in terms of system limitations.

Assuming you are making gearchanges now, would a system that augments your inputs, be acceptable? Rather than a system that takes care of 100% of the gearchange operation

Would a rocker pedal based system make better use of the movement you do have?
Last edited: Jul 22, 2021

Some years ago, I installed a Pingel solenoid shifter on a Commando (Quaife) gearbox in our Norton powered streamliner. No need for an ignition cutout, as we were still using a standard bar mounted clutch lever. It worked fine in testing at moderate speeds, but we discovered at Bonneville (in 2006) that it did not work at wide open throttle and high rpm. The problem was that the control box only turned on the solenoid for a fixed amount of time, and it wasn't long enough for a Norton. I had assumed that it would actuate the solenoid as long as my finger was on the button, but not so. The activation time was fixed by a chip in the electronics, and could not be changed, according to Pingle. There was a guy with a Harley also running at Bonneville that year who had the same problem, using the same Pingle shifter. His bike shifted fine at normal speeds, but not at high rpm. Apparently our old Norton and HD transmissions needed a little more dwell time to work at high speed. I've seen Harley street bikes using them successfully.

This is the best picture I have showing the Pingel solenoid installed. The liner was still under construction when it was taken. You might find that it works OK for normal street riding. We never tried that.

Another option is a pneumatic shifter. I've seen several landspeed bikes using them. That's what we originally planned to use, but the Pingel looked so much simpler that we chose it. We had to switch to a cable actuated linkage on the streamliner to get it to work.

I should add that the latest version of this shifter includes an ignition cutout circuit for clutchless shifting, and they have lots of examples in their catalog of installations on Harleys, Buells, etc., so it really might work for you. For good pictures, you need to go to their web site and download the catalog.

How about the old style scooter left side twistgrip gearchange? A lot of engineering perhaps, but surely possible??

EstuaryBoy said:
How about the old style scooter left side twistgrip gearchange? A lot of engineering perhaps, but surely possible??
Click to expand...

Norvespaton...
A fellow owner at the local TOC loved grafting engines into anything... what did he turn up on one night a Tossa .. a tiger 100 engine shoehorned into a Ossa frame

I’d be looking at a Pingel electronic up/down shifter and see if it will be of use. The air shifter setup I’d use on my Busas we’re up only, and of course only had a limited amount of air pressure.

OK, now a bit left field - convert it to hand lever like some of the Hardly Rideables do

Thanks to you all, I didn't mention that the bikes got rearsets/clipons. My original idea was to return back to std (from Norvil Rep) & see how I got on then, I've been for a short ride on my T150v today & this was ok, so I think that's the way to go.
Anyone going to the Norton day at Nat M/cycle museum tomorrow?

Depending how limited your foot movement is would a toe and heal lever work?
I used to have one on my old pre unit thunderbird ,it worked quite well
Probably no use with a rear set arrangement though

baz said:
Depending how limited your foot movement is would a toe and heal lever work?
I used to have one on my old pre unit thunderbird ,it worked quite well
Probably no use with a rear set arrangement though
Click to expand...

Heel and Toe, is what I meant by a 'rocker pedal based'.....maybe that isn't as clear to everyone as I thought.

I used on as standard fit on a Guzzi Californian I got to ride a few years ago and I thought it had merits, but would probably work better without the footboards.

But I agree, difficult to see it working with rearsets.

I saw one demonstrated a few years back at Mallory... Not sure of the make but it was being distributted by some outfit for disabled riders and thinkit was of Uk manufacture. Cannot think why it wouldnot work really well.. In the event I revertede to standard footrests.. a bad mistake if you have long legs.. Even with limited ankle movement it should be possible to change using the backof heel for one direction..butit means taking your foot off the rest every change. 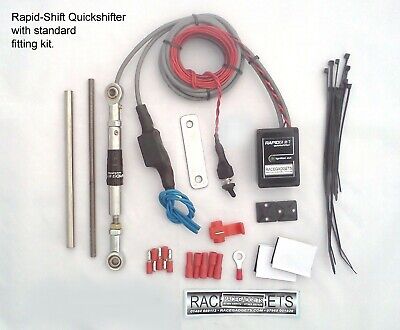 QUICKSHIFTER - Rapid-Shift Quick Shifter from Race Gadgets. This can be adjusted from 55 to 85 milliseconds (1000th of a second = 1 millisecond). This would help you by letting us rectify your problem and would also make our service/product even better.
www.ebay.co.uk