Valve seals and the Layshaft bearing improvements are the biggest concerns for me.

Madnorton said:
Owner in Yorkshire had 280,000 miles on his MK3, owned from new, did months at time in Europe touring.
Click to expand...

Thats a proper Yorkshireman fo’ thee. Getting his monies worth …

I have been running increasing quantities of Lucas Oil Stabilizer in my engine oil over the last 18 months. I have noticed an improvement in oil pressure consistency at operating temperatures, reduced valve train noise, reduced oil consumption, and a complete absence of metallics on my magnetic drain plug. I am currently running 1 quart of Lucas in my oil, with the remainder being Castrol GTX 20w50. I am quite happy with the results.

I have also been running 100cc of Lucas in the transmission, along with 320cc's of Amsoil 75w90 synthetic gear oil. Shifts like butter.

With quality parts and clean oil you can easily exceed 50,000 miles and still have a tight motor. But eventually the ring lands will pound out, loosen up and it will smoke. So its important to use better pistons with tighter ring lands than stock.

Stephen Hill said:
Interesting. I was thinking that after about 10,000 miles guides and some valve work was going to be needed.
Click to expand...

What would make you think this!?
52 000 miles on my '68, long distance touring only, original air filter, oil changed at about 2000 miles intervals.
Oil consumption nil, oil pressure 55 lbs from about 2000 rpm.

Hi all,
I guess the most consistent point being made by this thread is the inconsistency of people’s experiences regarding the reliability and longevity of our bikes.
Although a little before my time, by the early Seventies British bikes had a woeful reputation for reliability. They had become the butte of jokes amongst owners of squeaky clean Japanese opposition whose products were effectively plug and play’. I put this down to the combined factors of older design that required a higher degree of owner maintenance, attempting to squeeze more performance than that design was originally intended to produce, appalling quality control and a very poor marketing that failed to match the slick Japanese output.
Nevertheless, unless we are talking catastrophic big end failures most of the wear we experience are reasonably easily dealt with. Rejuvenation is generally inexpensive and well within the capability of the enthusiast owner. Therefore, in sympathetic hands our bikes are very long lived as is obvious from the number of surviving bikes.
It is interesting to see the sky rocketing prices that bikes such as Kawasaki H2s are commanding simply because the vast majority didn’t survive and reduced their internals to swarf decades ago (Not to mention those which were reduced to unsurvivable dimensions after the pubs closed on a Friday night).
So the discussion on expected engine wear must viewed in terms of how much of a problem the engine wear creates for the owner. A new set of rings and a valve job to a Honda CBX 1000 owner is a much more daunting problem than it is to a Commando owner.
As for the long term reliability of our bikes, I suspect it’s a bit like what Zhou Enlai said about the impact of the French Revolution, ‘it’s too early to tell’
It would be interesting to compare across forums what wear issues other makes are encountering. I suspect the owner who bought a BMW 75/5 in preference to a Combat Commando would have had a dream run over the last half century whilst a Suzuki Rotary would have been lucky to have outlasted Abba.
Nortons Commandos were always playing catch up but with good maintenance and a degree of sympathetic ownership they can still give excellent performance and should last indefinitely.
just a few thoughts.
regards
al

Bikes and Owner's are very different!! Friend has a 75 mk III which is stock and 60,000 top end rebuild only!! But the Atlas below has only 13,000 miles and stored since 73. Purchased it two years ago. Easily got it running but tour it down only because of oil leaks and this is what I found in the sludge trap!!! 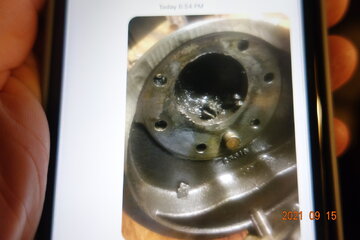 mean gene said:
Bikes and Owner's are very different!! Friend has a 75 mk III which is stock and 60,000 top end rebuild only!! But the Atlas below has only 13,000 miles and stored since 73. Purchased it two years ago. Easily got it running but tour it down only because of oil leaks and this is what I found in the sludge trap!!! View attachment 81882
Click to expand...

As a yoot I was a grunt for a BSA guy. Bikes were for running hard and fast with a few adults who drove them like an adult.
1ok it was rings bearings and guides. Often it was pistons as well. As JS said the lands would get beat out. Keep in mind that USA bikes were geared down for quarter mile numbers which were EVERYTHING at the time. Very rarely saw a BSA Tri or Norton on offer with more than 20k on them. If you did they were clapped.
No aircleaners is a prescription for frequent overhauls.
As for temperatures, hot wx isn't a british bikes friend. And speaking of wx, it is much less dusty in blighty than in most of the states. Enfield Interceptors came with bellmouths right from the factory. I can only imagine those poor beasts in California: heat and dust.

yoot aka younguns aka youth

clapped aka done aka worn out