This may sound like sacrilege, but I am tired of flicking pointers and failing gauges. Has anyone converted the 1.75in Lucas ammeter into LED operation using either an analog display or a LED bar type of display? Most displays I have seen do not display + - or current charge / draw in a symmetric manner. Some units display current draw by flashing - this is annoying and not desirable. Furthermore, making the electronics fit within the small Lucas enclosure will be demanding and may require a separate module. On the upside is the ability to integrate a voltmeter also.

A quick search through Amazon turned up a few contenders. You would need to create an enclosure/housing to make it fit (3D printing?).

I personally prefer a voltmeter over an ammeter.

The digital combined voltmeter/ammeters I can find don’t appear to indicate direction of current.


Last year I saw a bike with one of these:

Here is the link to it:

It was fitted into the insides of the standard 1 5/8" ammeter casing - the owner had just gutted the insides of an old faulty one, and stuck this in.
It looked brilliant.

Unfortunately, there's no such thing as an ammeter-on-a-chip. A voltmeter can measure its own supply voltage, an ammeter needs an external power source and either a shunt or hall effect sensor to provide the signal. Here's one, but it ain't gonna fit in a Lucas meter housing:

I had an electronic gizmo that measured the voltage drop in the earth lead and then lit a tricolour LED depending on which way the voltage drop was, so showing whether current was flowing into the battery (green LED) or out of the battery (Red LED) or the load was balanced (Orange LED). It worked well and I only got rid of it when I fitted the Alton starter as there was no space for the circuit board in the battery box. It was an electronic kit from Maplin in the UK, who sadly are a pale shadow of their former self and no longer make it.

Thanks, guys. I know the electronic circuit of an ammeter will require a shunt, it's easily resolved (see link). There are some gauges with an integral shunt.
The concept of a hall effect sensor was new to me - maybe a little impractical on a bike?
Yes, an ammeter needs an external power source. However, the measuring circuit is not voltage sensitive usually.

There are differing opinions whether a voltmeter is a complete substitute for the ammeter. That's why I would like to fit both inside the ammeter housing.

gforce: Thanks for the link and pointing out the correct housing diameter.

An ammeter circuit developed for vehicles will show a +- charge. Here is one for the marine market, too large for the h/l shell though:

DIGITAL AMMETER - SENSOR & GAUGE Marine grade digital ammeter. Fast and easy to fit, available in all standard face and bezel colours to ensure continuity with all other gauges. The ammeter is only available as a kit consisting of a heavy duty sender & gauge. 52mm diameter gauge Range +/- 150...

For sake of another opinion, I really have not felt it necessary to mount a permanently installed ammeter on my bike. That being said, I have used an ammeter in a multimeter to measure the current draw of all typical power consumers on my bike to ensure that the alternator is capable of keeping up and so that the battery is not drawn down too quickly while the engine is idling.

I have an Alton e-start. With my permanently installed voltmeter, I see the following conditions:

Normal Operation:
1. Idle with the headlight off: 13.1 - 13.3 volts, blipping the throttle nets 13.5-13.6 volts
2. Starting off down the road after a cold start, head light on: 13.6 volts climbing to 14.4-14.5 volts once the battery has recovered
3. Coming to a stop at a traffic light: Voltage drops to 13.8 volts, and decays slowly as power is drawn from the battery. If is drops to 13.4 volts, I will flip over to the pilot light until the traffic light turns green

Note much of my actions listed above are to keep the Shorai battery in it's preferred operating zone: 13.1 to 14.8 volts

With the Shoria battery, I have had at least one alternator issue, and by turning off the lights, I have been able to ride home up to 20 miles with minimal battery voltage drop (0.1-0.2 volts)

I installed a Sparkbright http://www.sparkbright.co.uk/sparkright-eclipse-battery-voltage-monitor.php easy to see in bright sun and accurate.

marshg246 said:
Time to make heads hurt and to have everyone tell me I'm wrong.

The Lucas ammeter (basically all ammeters) is really a voltmeter measuring a voltage drop across a load. That voltage drop can be positive or negative in relation to the voltmeter connections.

If you install an actual voltmeter, the positive/negative can be done in your head. If the supplied voltage is above the battery voltage, you are charging and an ammeter would show positive. If the supplied voltage is below that battery voltage, you are discharging and an ammeter would show negative. Note, I didn't say the battery's theoretical max voltage, I simply said the battery's voltage.

See concours post #2 in this thread. He is absolutely right. A voltmeter makes it clear how your electrical system is doing - an ammeter only partly does. Not only that, the voltage drop across the ammeter is robbing from the rest of the bike (minimal, but robbing none the less).
Click to expand...

I'm firmly in the voltmeter camp. It really tells you all you need to know, actually more than an amp meter. If the voltage is in the correct range then your battery is charging if it needs it. After an electric start the voltage will take a bit to recover to normal as the battery is taking lots of current. Automobiles with 100+ amp alternators recover to system voltage quickly even though though the battery is taking lots of current after a start. Our bikes with limited output take some time after a start. One can estimate how drained the battery was by the time it takes to recover to system voltage.

In the event of alternator failure amp meters don't tell you much - just that the battery is discharging but a voltmeter gives an idea of battery condition - how much time you have left before you walk.

peculierboy said:
I installed a Sparkbright http://www.sparkbright.co.uk/sparkright-eclipse-battery-voltage-monitor.php easy to see in bright sun and accurate.
Click to expand...

After the last repop ammeter was worse out of the box than the one it was to replace i made this up to fit a BSM or similar into the ammeter space. 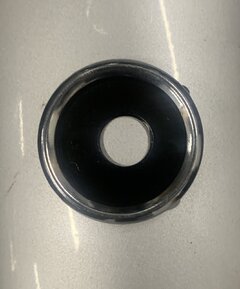 "With the Shoria battery, I have had at least one alternator issue, and by turning off the lights, I have been able to ride home up to 20 miles with minimal battery voltage drop (0.1-0.2 volts)"

FWIW, I had a charging system failure 50 miles into a group ride. I turned around and the Shorai 18AH had no trouble getting me the 50 miles back to the house (TriSpark). I was quite impressed!

If you go for a digital voltmeter, why not combine it with a USB port ( for GPS, etc..) ?
It would fit neatly in the ammeter space where I have a clock.

It does not sound like this application is what you seek but maybe an idea source?

The charging/monitoring receptacle can be mounted anywhere on your motorcycle. I use it for charging and batt. maint. along with e-system voltage readout. I originally mounted it between the gauges until I became confident the electrical system was going to behave and then moved it down next to the batt./starter switch.

The meter gives you a constant readout as to what the system is doing, whether sitting, idling or wound up with all the lights on.
I also have a separate module with a USB charge port I can plug in for the all-mighty cell phone.
That receptacle is one of the best and most useful additions I added to my electrical system. 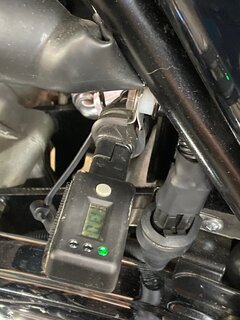 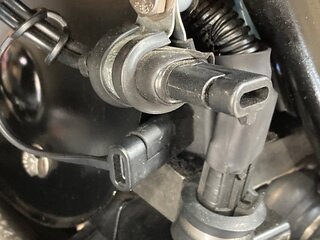 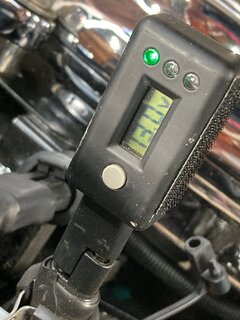 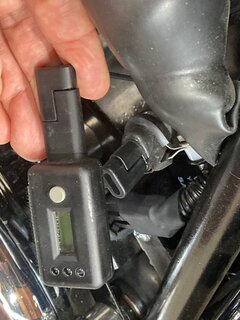